The Spaunton Estate is proposing alteration of common land boundaries at Spaunton Quarry in line with the process required by Section 16 of the Commons Act 2006. The aim is to allow for the improvement and tidying up of redundant areas of the disused site and also to bring the common land boundaries into line with topographical features, such that the demarcation between common and non-common land can be better understood. If the proposals are accepted, the end result will be an extra 515 m2 coming into common land status.

The Spaunton Estate appointed Jan Devos to handle the formal consultation process, which mostly took place in 2015. The Events & Meetings page lists meeting dates and times. The aim was to consult as widely as possible with all those organisations and individuals who have an interest in the site, and particularly with those who hold Rights of Common (“commoners”).

This page of the website shows a current topographical map of Spaunton Quarry (fig 1) and gives the background to the proposal.

The Proposal section of the website gives details of the existing common land areas and the proposed new areas of common land. These areas of common land (shaded blue) are overlaid on the topographical map of the quarry so that the alignment with physical boundaries can be seen. You are able to download and print the maps in either A4 or A0 sizes.

Consultees were encouraged to complete and return the questionnaire to share their views on the proposals. 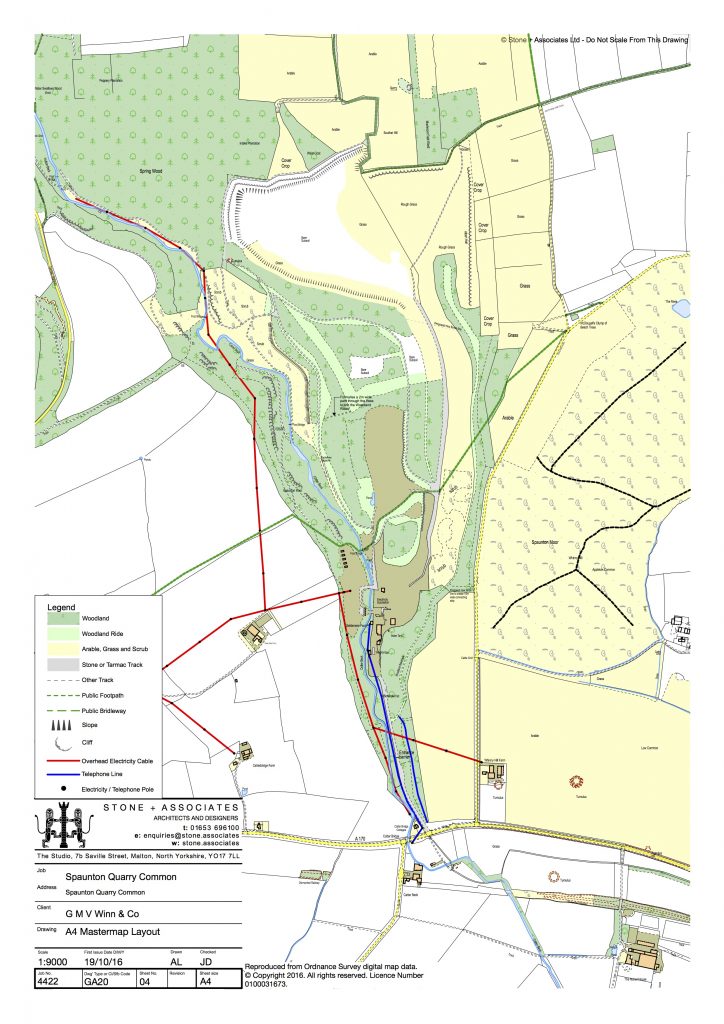 Located west of Appleton Le Moors, and within the North York Moors National Park, Spaunton Quarry was quarried for limestone for over 170 years. The Spaunton Estate owns the quarry and is committed to cleaning up and improving the site now that that the quarrying phase of its working life is coming to an end. An aerial map of the quarry is here.

Where there is sufficient subsoil, improvements have been made in line with the Master Restoration Plan agreed with the North York Moors National Park Authority (NYMNPA) over a decade ago. These include completing an extensive tree planting programme to expand wildlife habitats on those parts of the site rich in flora.

Where over a century of quarrying has removed nearly all the topsoil from the site there are extensive areas of bare earth which are no longer capable of being restored to good agricultural use. Work has already begun to remove redundant buildings (view images of the disused works). There are flat areas at the bottom of the various banks of the quarry including where the stone crushing plant and the tarmac coating plant once stood; also where the quarry products were stockpiled. They extend to probably less than 3% of the whole quarry site. These flat areas are considered “brownfield” and are unsuitable for agricultural use. The aim is to find new, beneficial uses.

While it is not yet known what those uses will be, the National Planning Authority has indicated that they may consider a future planning application connected with visitor accommodation or perhaps renewable energy (for example wood pelleting or solar photovoltaic). There is existing consent for five log cabins on the area to the west of Catterbeck, just south of the public footpath (see maps on this website for the approximate positions).

Another consideration is that the current quarrying activity – which is about to end – precludes people exercising their right of public access on foot under the Countryside & Rights of Way Act 2000 (known as the CROW Act). All common land is designated as Open Country to which this new right of public access on foot applies. Therefore it will become important to ensure the boundaries of the common land can be easily understood on the ground as well as to provide –  where possible – links to other public access facilities.

There are therefore several considerations:

With all this in mind, the Spaunton Estate is proposing changing the boundaries within the area of the quarry to swap parcels of common land for non-common land. Such a swap would facilitate the continued tidying up and improvement works already begun and align the common land boundaries with geographical features.